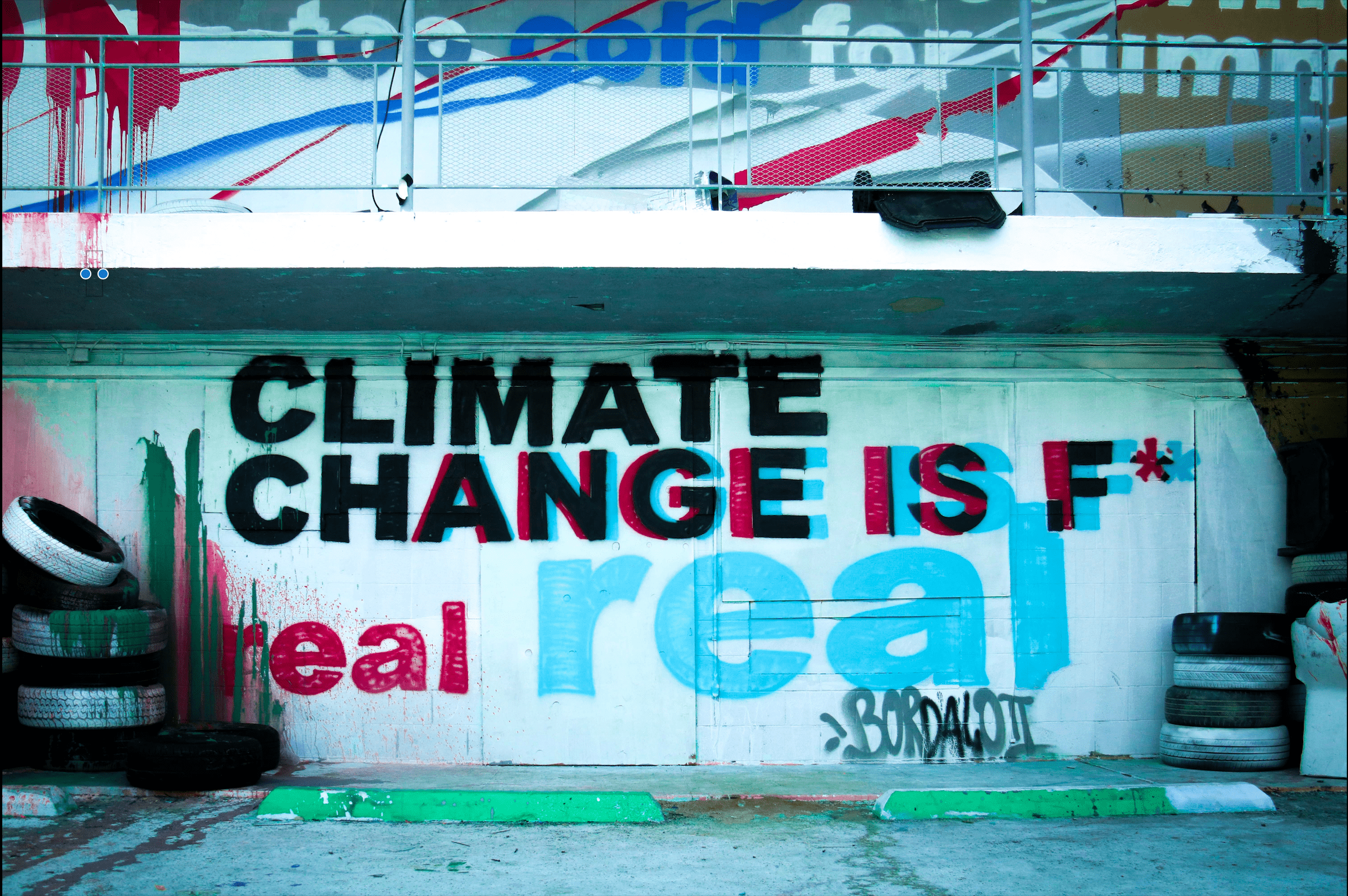 The Art Motel, one of Life is Beautiful’s largest art installations, is a spectacle for the eye. This year, the Zappos-sponsored exhibit partnered with Portuguese activist and artist Bordalo II to create an immersive experience highlighting ecological issues. 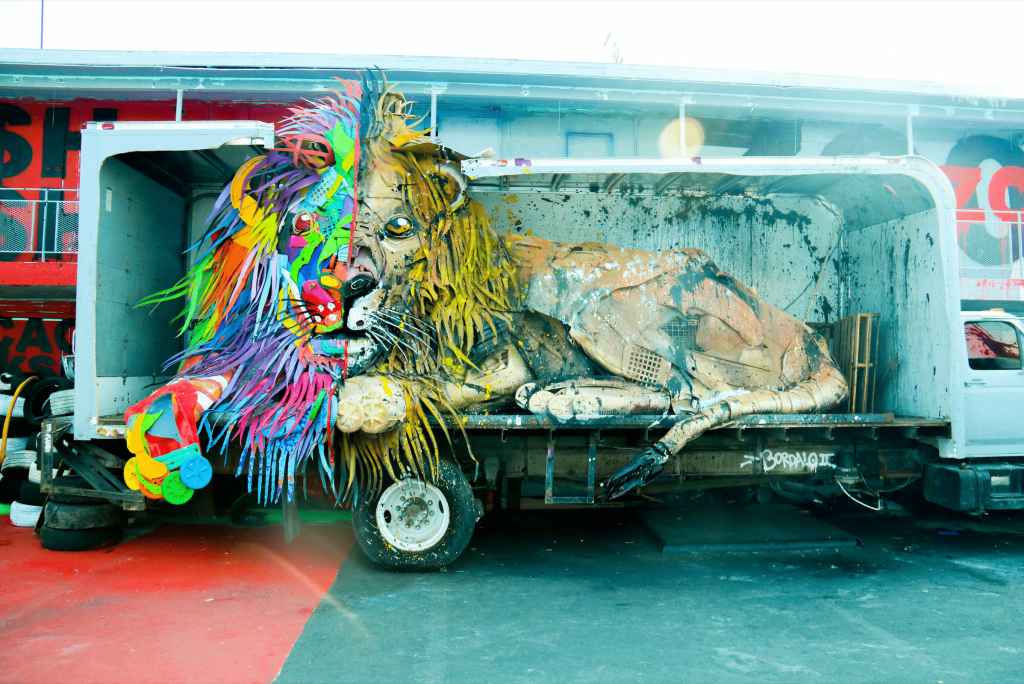 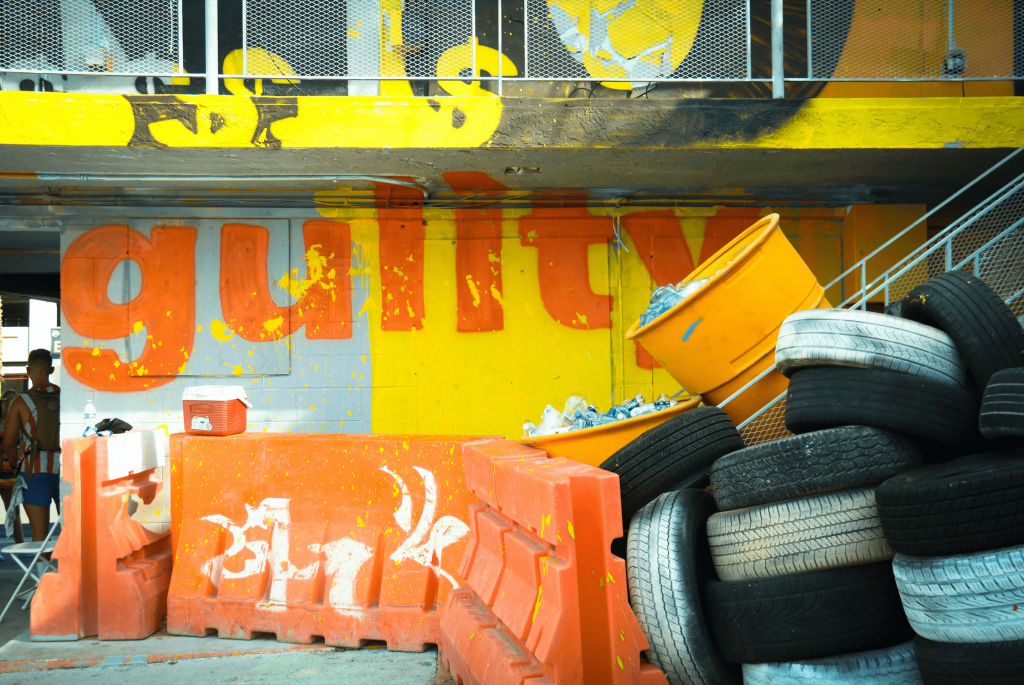 Bordalo’s project “WILD WILD WASTE” is a visual encapsulation of human waste and its impact on the environment, particularly with regard to animal habitats. An amalgamation of tires, plastic bottles, scrap metal, plastic and other waste materials, Bordalo’s “TrashAnimals” sculptures are both socially conscious and visually arresting. In addition, phrases like “climate change is f* real” and “empty the waste” are painted against the decrepit motel walls. Both the sculptures and stenciled words are a provocative reminder of the environmental problems caused by humans. 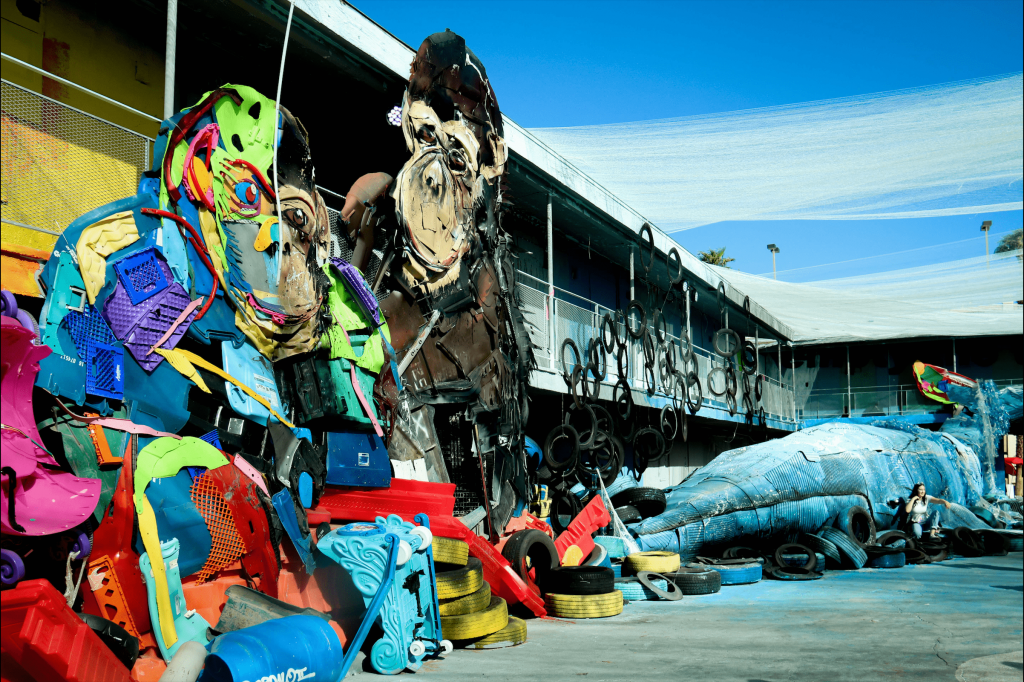 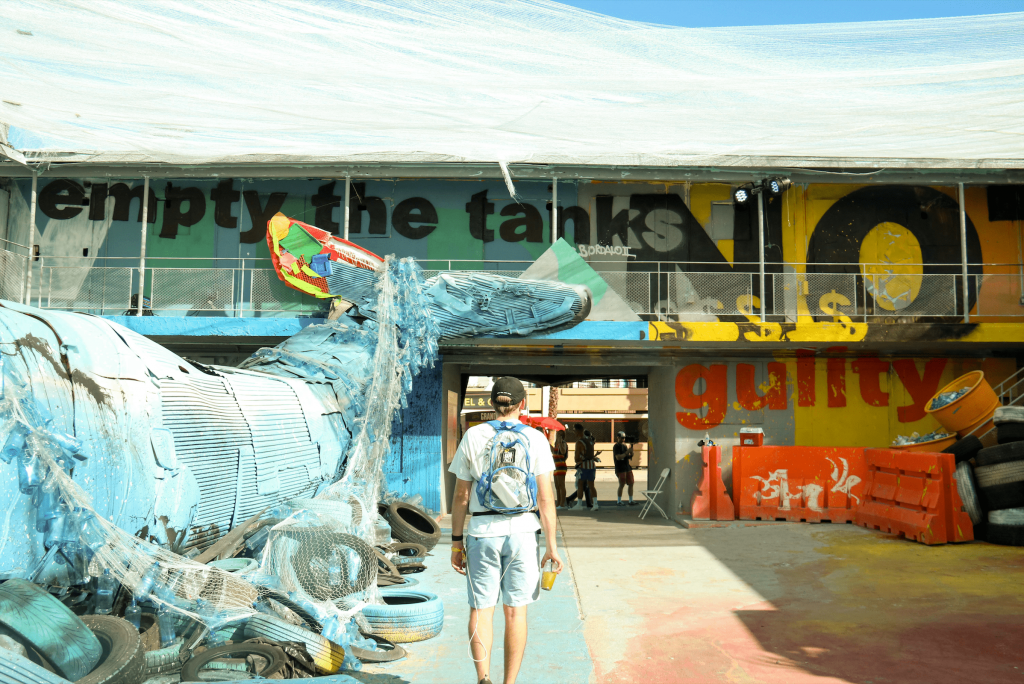 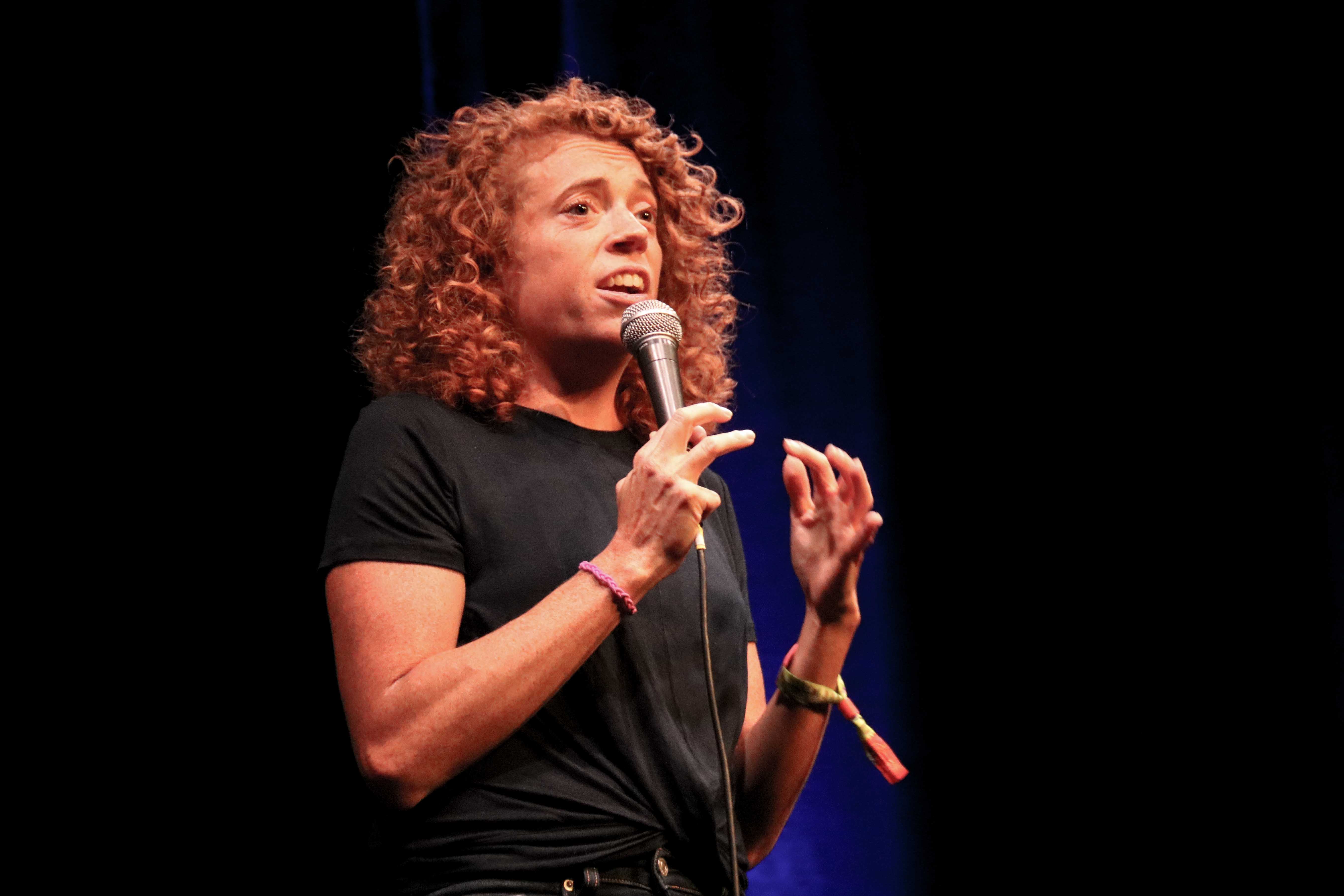 At Life Is Beautiful’s The Kicker, comedians and entertainers took their talents to the small stage to perform for a more intimate audience. And Saturday’s main attraction was White House Correspondents’ Dinner sensation Michelle Wolf.

Patti Harrison was next, and as a comedic writer and actress with very little stand-up experience, she used her set as a bit of a experiment. Harrison explained that the festival one of her first stand-up performances and that she was still learning the ropes, so she prefaced her set by trying different bits and observing the results.

Most of her set featured her asking different members of the audience what their names were, snarkily commenting on some and playing off of the awkwardness of introductions. She ended with a song about one of her own personal experiences with the aptly named “I Left My Baby Out in the Sun,” featuring a hysterical Stevie Nicks impression.

Finally, Wolf emerged to perform almost 25 minutes worth of material, racking up laughs all the way with creative takes on sex robots, kidnapping and more. Almost the entire audience was familiar with her Correspondents’ Dinner appearance, as evidenced with anticipatory laughter whenever she made vague allusions to the current administration. Yet, most of her material that day revolved around other subjects.

Wolf also proved that tasteful comedy in the #MeToo era is possible as she wittily pondered about a living President John F. Kennedy receiving an accusation and men using their penises for evil. As well, her incisive comedy often hit at the heart of toxic masculinity, perfectly toeing the line between message and genuine comedic value. 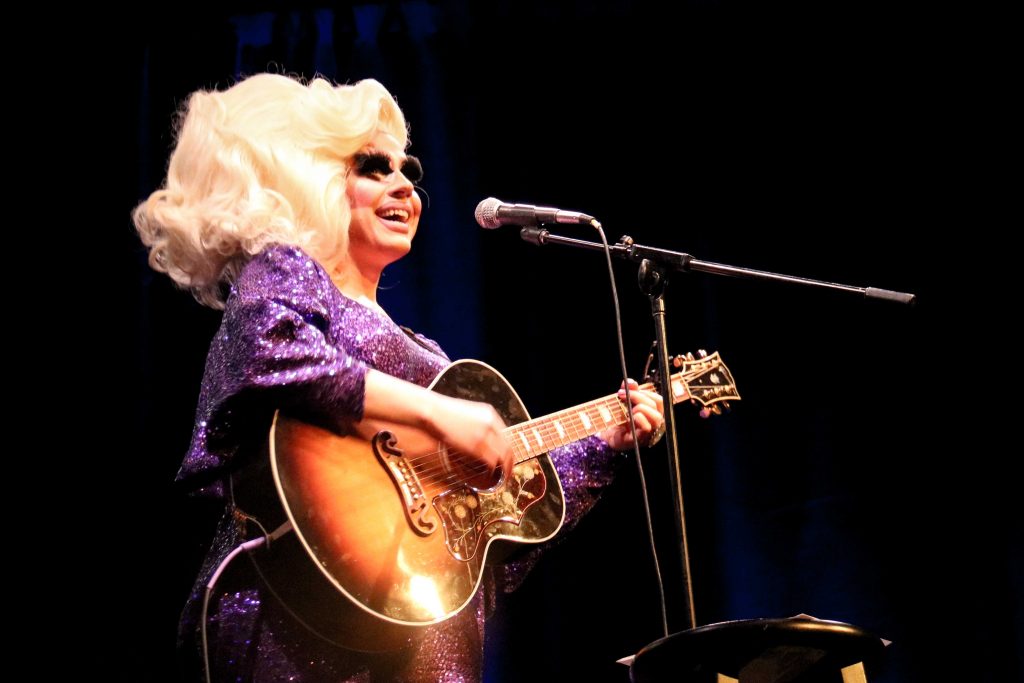 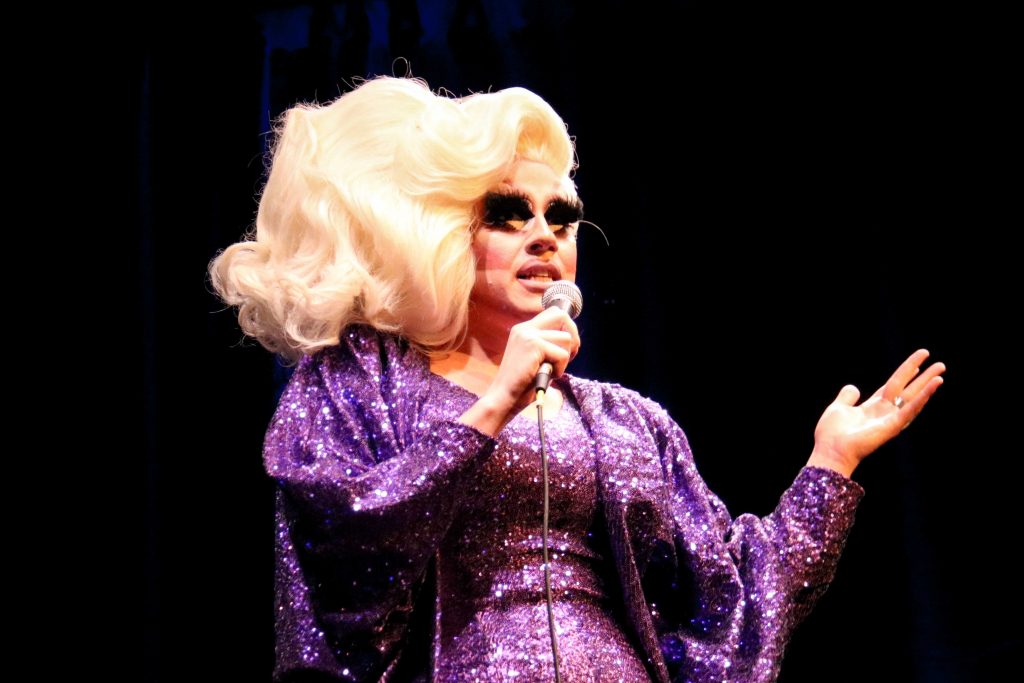 RuPaul’s Drag Race All-Stars 3 winner Trixie Mattel did not hold back during her comedy routine at Venue Vegas. The drag superstar came for everyone, potentially even snatching some people’s wigs along the way. From taunting straight women to white people, Trixie Mattel took every opportunity to interact with audiences.

“Every girl went on Pinterest and searched up festival wear,” she said, which received howls and thunderous applause for festival attendees.

Trixie Mattel wasted no time calling out hordes of audience members, going so far as to refer to them with made-up names.

She also demonstrated her vocal chops while mocking white culture, getting audience members to sing along to “Sk8er Boi,” Landslide” and “Wonderwall” as she performed with her guitar.

From start to finish, Trixie Mattel weaved her routine with punchy lines about gay culture, from self-deprecating jokes about being a drag performer to mockery of hookup culture.

Trixie Mattel had no shortage of laughter, and it’s no wonder that audience members ended the show with a standing ovation for the comedian/folk singer/drag performer. Yas, queen!

Foster the People finds its groove at Downtown Stage 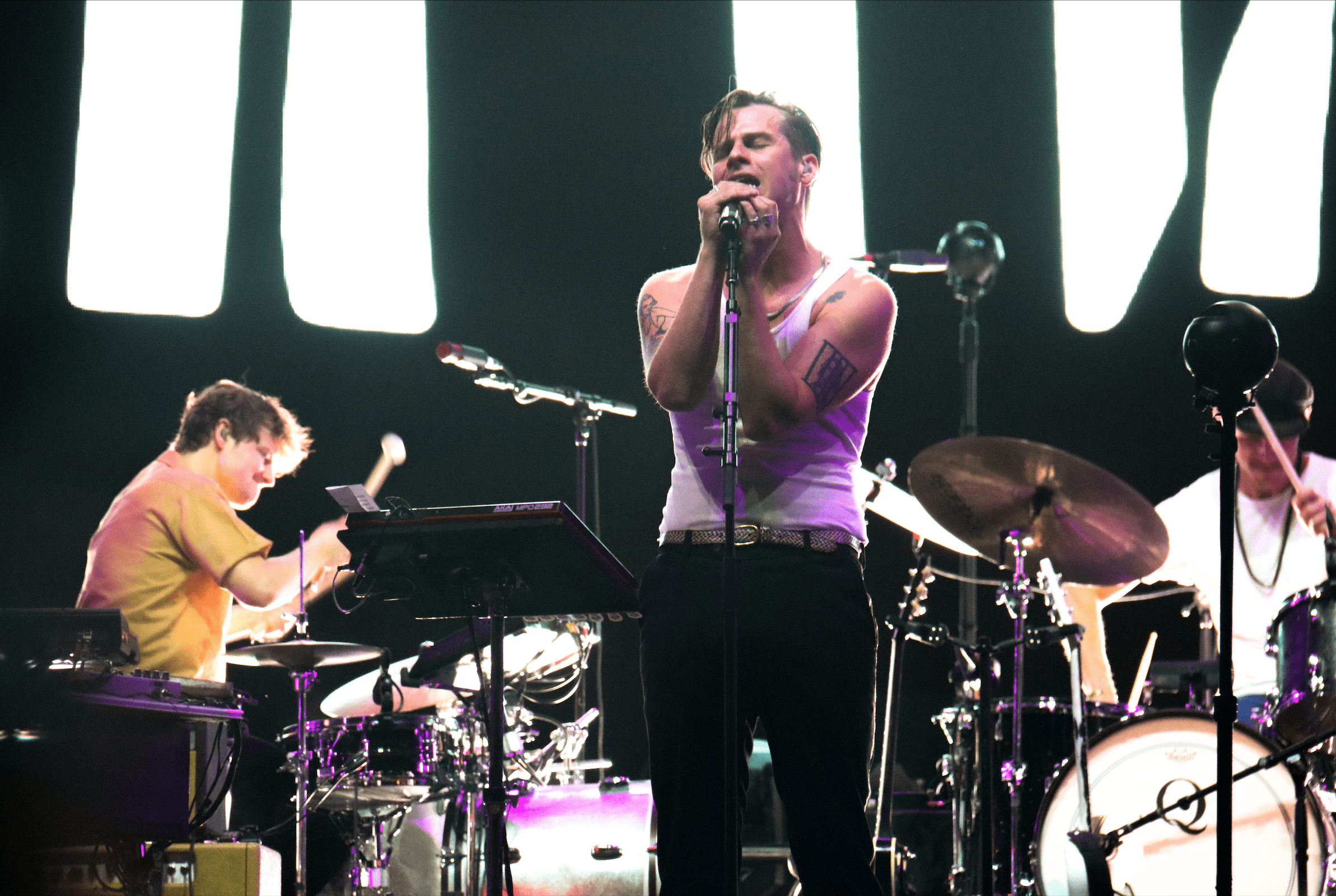 Foster the People made a statement tonight, as it took the main stage on Saturday evening. The indie-pop band has been enjoying the success of their its album “Sacred Hearts Club” and hit single “Sit Next to Me,” seven years after making radio impact in 2011.

Lead vocalist Mark Foster captivated audiences with his musicality and charisma, singing every word with gusto all while switching between his keyboard and synth pad. Instrumentalists Sean Cimino, Isom Innis and Mark Pontius joined along from start to finish, drumming and strumming the night away without ___ .

Loyal fans chanted along with songs across their discography, from “Helena Beat” and “Coming of Age” to and “Pay the Man” and “SHC.” Notably missing was “Pumped Up Kicks,” the breakout hit that brought Foster the People into the limelight.

Prefacing “Sit Next to Me,” the penultimate song of the night, Mark Foster emphasized his gratitude to fans who came out to see the band.

“It’s times like this that makes me feel truly happy to be alive,” he said.

To end the set, Foster the People brought out Cirque du Soleil performers for an epic performance of The Beatles’ “Hey Jude.” As heaps of red confetti filled the sky, Mark Foster passionately chanted the final “na-na-na’s” with thousands of fans.

Overall, the band offered festival attendees plenty of feel-good, nostalgic moments despite holding “Pumped Up Kicks” from the setlist — a bold move indicating that Foster the People is ready to move forward. 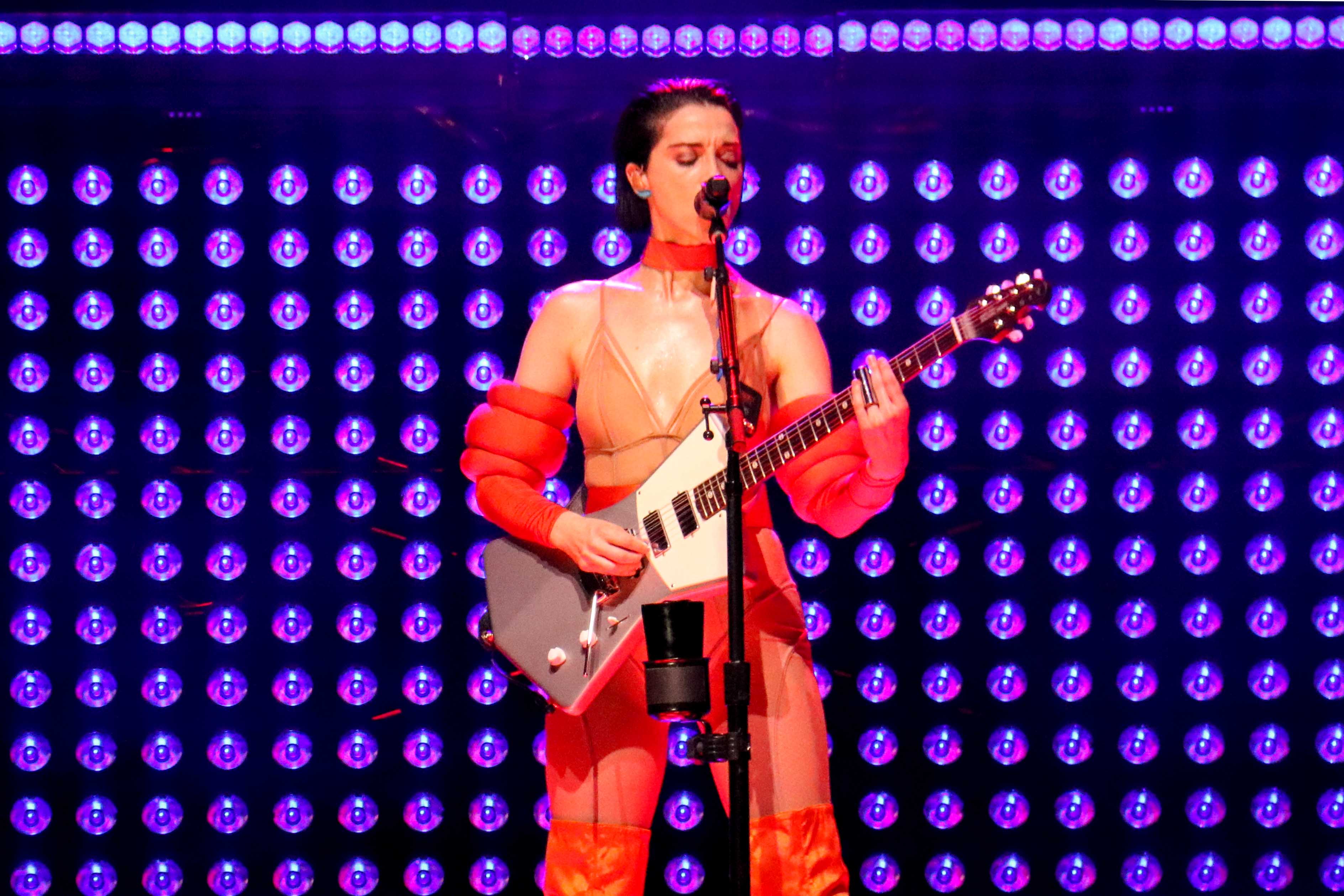 After hot Las Vegas sun finally gave way to the night, art-rocker St. Vincent, also known as Annie Clark, and her band took to the Bacardí Sound of Rum Stage in support of her 2017 album “MASSEDUCTION.” Clark, clad in a short romper and tall, white go-go boots, emphasized the sexually charged nature of the album with sensual vocal performances and euphoric guitar solos.

She and her band quickly moved into popular cuts from the project like “Pills,” “Los Ageless” and “Sugarboy.” Her visuals featured abstract photos and videos — some seductive, some stunning, some stomach-churning — that she took in coordination with the tour.

As well, to accompany the ever-changing dominant color of her lights, Clark switched between different shades of her customized Music Man electric guitar, delivering long-form jams of her accessible art-rock tracks.

She ended her set with a solemn rendition of “New York,” in which she encouraged audience members to clap along to the somber acoustics. 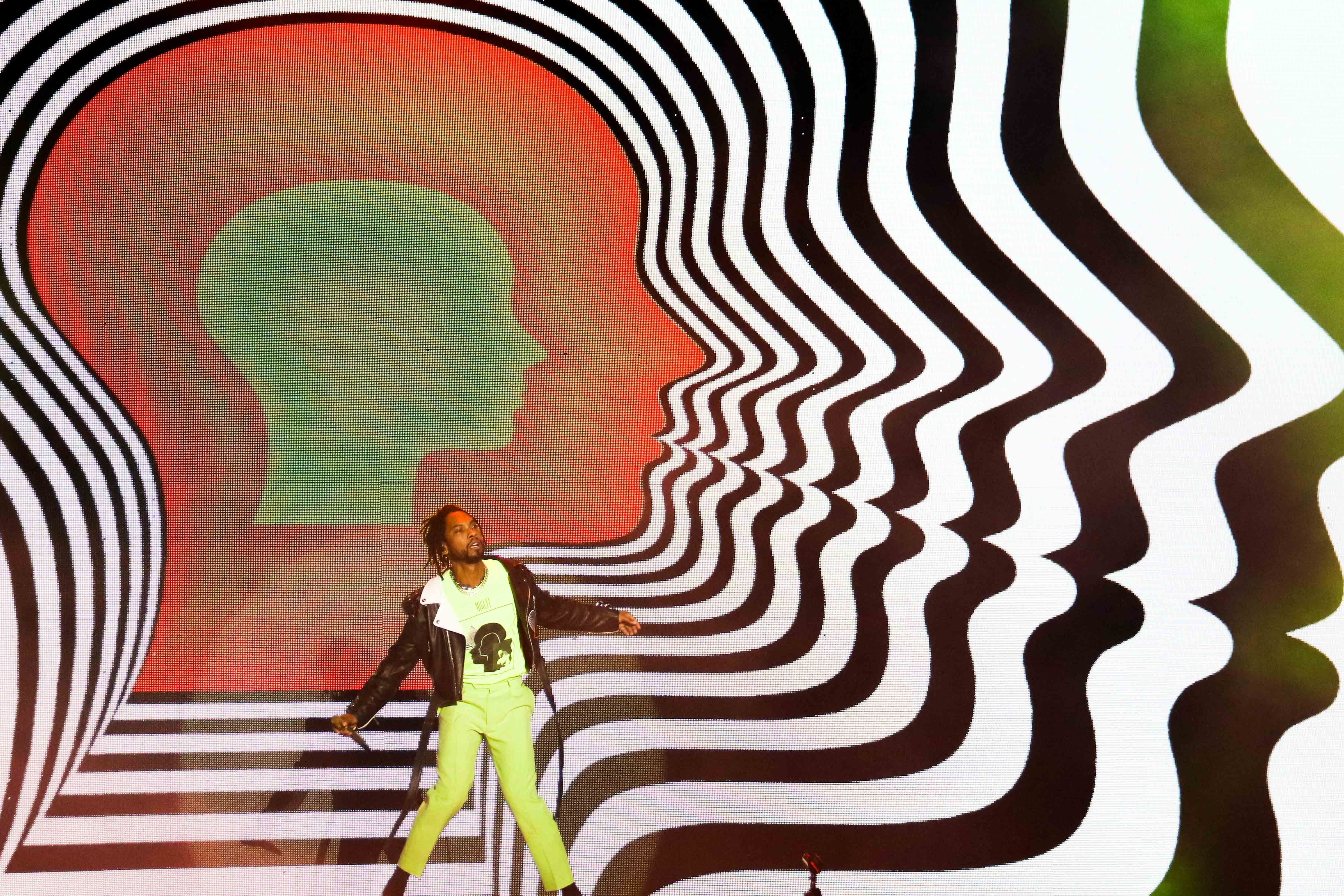 Alternative R&B singer Miguel played the second-to-last set of the night on the Bacardí Stage, and he faced an uphill battle of warming up the crowd before Travis Scott. In fact, judging from the surplus of “ASTROWORLD” merchandise and general lack of crowd enthusiasm, the vast majority of the audience seemed to be gathered for Scott rather than Miguel.

Miguel, however, put on a fantastic performance featuring a full band and several back-up dancers, which helped generate a stadium-sized sound for songs like “Do You…,” “How Many Drinks?” and “What’s Normal Anyway?”

“Energy is everything,” Miguel said. Despite very little engagement from the crowd, Miguel maintained his composure throughout the performance, often offering words of positivity between songs.

Afterwards, Miguel ended his set with the sensual combination of “Waves” and his smash hit love ballad “Adorn,” which served as his most memorable vocal performances of the evening.

Florence and the Machine celebrates with fans during midnight set 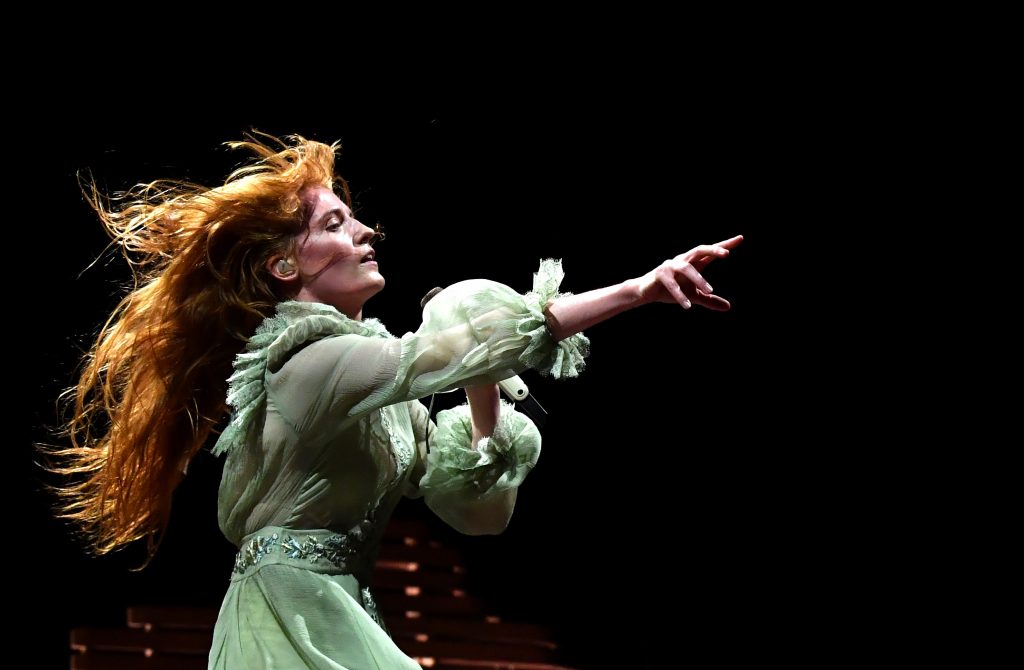 Photo courtesy of Jeff Kravitz/FilmMagic for Life Is Beautiful 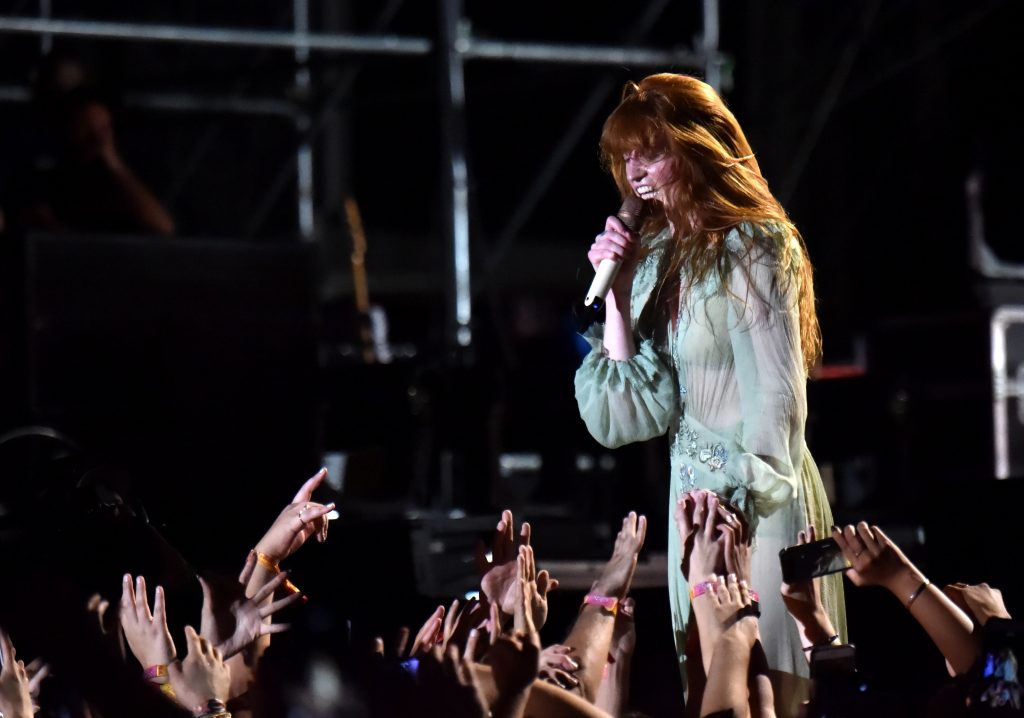 Photo courtesy of Jeff Kravitz/FilmMagic for Life Is Beautiful

Florence Welch took fan interaction to the next level during her 90-minute set at the Downtown Stage.

The British singer performed barefoot through the evening, resembling a bohemian goddess with her graceful dance moves.

Much of the set was dedicated to the changes that occurred in Welch’s life before the release of Florence and the Machine’s fourth record “High as Hope.” From her celestial crooning to exhilerating crescendos, Welch displayed a newfound level of confidence when performing “Delilah,” “Patricia,” “South London Forever” and “Hunger.”

Florence Welch demonstrated her gratitude throughout the set, encouraging fans to hug and hold hands with each other during hits like “Dog Days Are Over” and “Sweet Nothing.”

At one point, the singer even ran off the stage to interact with crowds in the back, embracing fans and holding hands with them. After leaving the stage for approximately two minutes, Florence and the Machine returned for an special encore of “Big God” and “Shake It Out.”

The performance was potentially one of the best at this year’s festival. And what Florence and the Machine lacked in physical theatrics, she made up with audience engagement and spirituality. 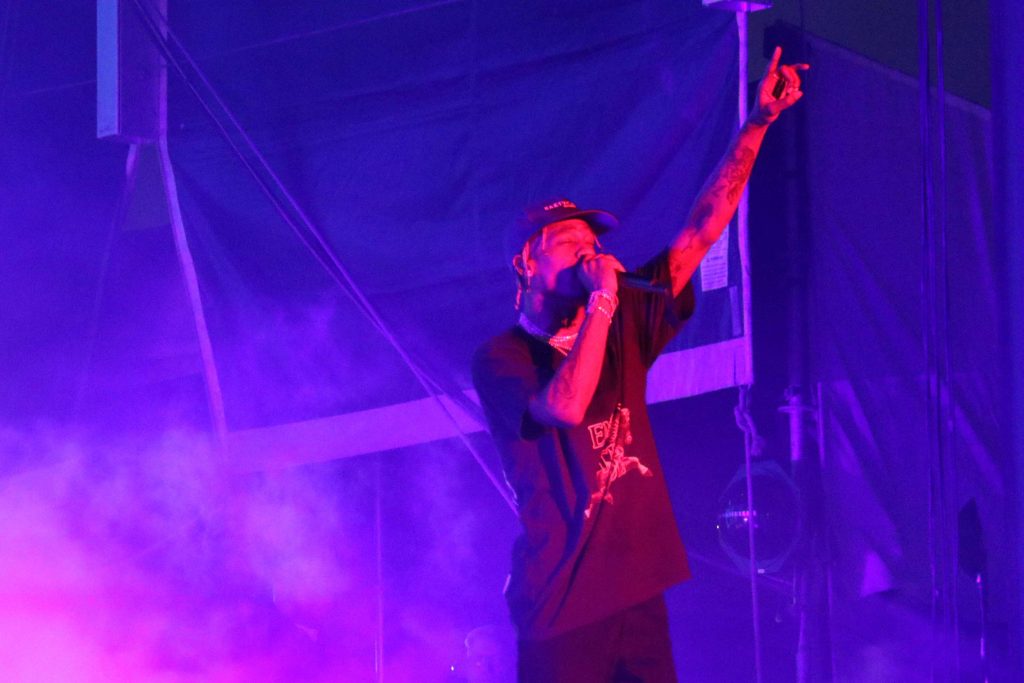 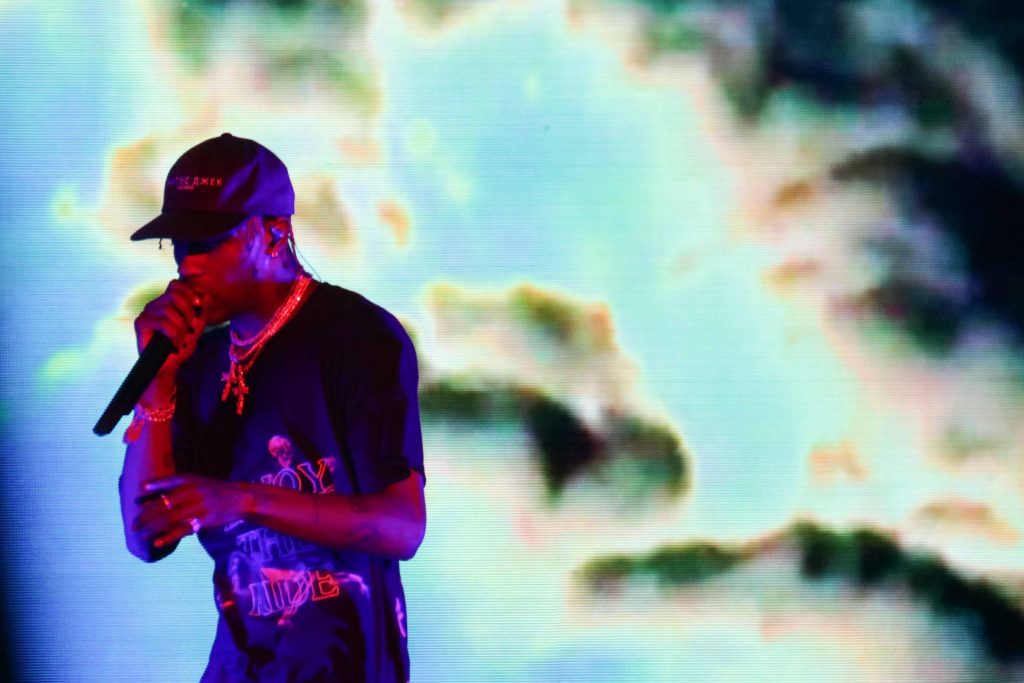 For the final performance of the evening, Travis Scott delivered one of the weekend’s most highly anticipated sets in what would be the Las Vegas stop of his “Wish You Were Here Tour.” Fresh off the release of his chart-topping album “ASTROWORLD,” Scott pulled a ravenous crowd that had been waiting for one of the rapper-producer’s notoriously aggressive live performances.

Scott kicked off the set with “ASTROWORLD” introductory track “STARGAZING,” and from there the masses overflowed with energy. Mosh pits quickly opened up, much to the chagrin of some but to the pleasure of more.

From there, Scott sped through the “ASTROWORLD” tracklist, rattling off hits like “NO BYSTANDERS,” “HOUSTONFORNICATION” and “BUTTERFLY EFFECT.” Early in the set, a stray fan rushed the stage to join Scott, and in true Scott fashion, instead of having security remove him, he encouraged the fan to stagedive into the crowd, which he happily obliged.

“Vegas kids have no chill,” Scott said with a chuckle.

Yet, the late hours and fatigue eventually got the best of the crowd, which led to a large disparity in energy between the sleepier sections and mosh pits. Thus, Scott attempted to reenergize the crowd with his last few songs, which included the airwave-dominating “pick up the phone,” “goosebumps” and “Antidote.”